Not too long ago, I had a friendly discussion with someone over a conspiracy theory that I believed was unfounded and improbable. The other person referred to a radio and podcast host that promulgated and supported this theory multiple times; consequently, I later took a closer look into this media personality’s theories on the matter discussed, and others.

I was amazed at this host’s continual mention of unsubstantiated, completely bizarre theories, but was even more amazed at his large following. Many people are subscribed to his multiple platforms, and he undoubtedly makes quite a tidy profit from sitting behind a microphone, dealing information on supposed hoaxes that make the moon-landing conspiracy look amateurish.

I asked myself the question “what makes people buy into this type of rhetoric?” Intelligent people. Ostensibly stable people. And yet, they swallow preposterous conclusions. I thought about that for a few days and came up with a conceivable answer.

My supposition was based on human nature, and this little fact: humans are not fond of being taken advantage of. We are usually on the lookout for ways in which someone might dupe or shortchange us. A simple Google search will provide you with countless articles, books and podcasts on the psychology of subterfuge; how to avoid deception; how to spot a liar; how to read body language; and how to make sure you’re never the unfortunate victim of a con. This is because A) we hope we are never a vulnerable fool in life situations, but B) most of us have been at one time or another, and so determine we will not be in future, if we can help it.

Here’s the problem with this: sometimes in the heat of our efforts to not be duped–we get duped.

Because we are so obsessive about not having the wool pulled over our eyes, we listen the closest when someone tells us it’s happening, and why. “Let me tell you why you’re a victim of ______________”: fill in the blank with any scam, government failure, societal problem, etc. And in our defiance of those we suspect may be tricking us, we listen to the people who are genuinely tricking us.

You see, someone who tells you about an issue, and then provides an antidote to the issue that leaves you dependent on them, may not have your best interest in mind. Conspiracy theorists may want you to stay subscribed to their podcast so that they get paid for advertising, merchandise, and speaking events. Many controversy-spotlighting politicians merely want your perpetual vote and financial support.

If you create a need first (tell someone about a malfunction or issue somewhere that they are probably unaware of), then you can easily sell an answer. People become dependent on your information, your product, your program, because they believe that without it, they’ll be helplessly taken advantage of.

We innately know this to be true, of course, but it’s worth further consideration. Because while you might never be taken in by a podcaster or politician, there’s probably at least one area in your life in which a whisperer could present you with a seemingly revelatory thought that could result in devastation, and that is worth noting.

Beware the voice that unveils some hidden problem and causes you to ask “what then, do I do about it?”, because you can become so paranoid about potentially becoming a victim, that you actually become a victim, and in your attempts not to fall prey to one thing, you can fall prey to something else.

Stop for a minute, and think about the source of the information. And then consider, long and hard, what their motive might be, and what your motive might be in perhaps desiring to attribute credence to them and their message. And only then, make a decision about whether you believe them or not.

Importantly, this concept is not just true in the natural realm, but also the spiritual.

Satan is the world’s oldest peddler of lies, and perhaps, the greatest example of manipulating human beings in the manner I just referred to.

Now the serpent was more subtil than any beast of the field which the Lord God had made. And he said unto the woman, Yea, hath God said, Ye shall not eat of every tree of the garden?

And the woman said unto the serpent, We may eat of the fruit of the trees of the garden:

But of the fruit of the tree which is in the midst of the garden, God hath said, Ye shall not eat of it, neither shall ye touch it, lest ye die.

And the serpent said unto the woman, Ye shall not surely die:

For God doth know that in the day ye eat thereof, then your eyes shall be opened, and ye shall be as gods, knowing good and evil.

And when the woman saw that the tree was good for food, and that it was pleasant to the eyes, and a tree to be desired to make one wise, she took of the fruit thereof, and did eat, and gave also unto her husband with her; and he did eat.

We see Eve’s natural, human longing to be wise and “in the know” in this passage, and we see Satan take shameless advantage of it. “Ye shall be as gods, knowing good and evil”, gave her reason to believe that she had somehow been held back from a hidden vault of divine knowledge. Victimized. And as she saw that the fruit of the tree was to be desired to make her wise, she took a bite–and in that moment, actually became a victim of a hidden plot that benefited the serpent much more than it benefited Eve, or the rest of mankind.

Don’t let Satan–or anyone else–sell you ideas and philosophies that they claim will make you free, but in actuality, make you their slave.

Do not become gullible in the act of what you think is fortification. Exercise sound and godly judgment. Whenever you have the recurring thought that you are at a disadvantage somehow in the church, or that you have somehow been victimized by some experience; or someone comes and whispers in your ear with a list of reasons why you have–again: stop for a minute, and think about the source of the information. And then consider, long and hard, what their motive might be, and what your motive might be in perhaps desiring to attribute credence to them and their message.

And only then, make a decision about whether you believe them or not.

Now I beseech you, brethren, mark them which cause divisions and offences contrary to the doctrine which ye have learned; and avoid them. For they that are such serve not our Lord Jesus Christ, but their own belly; and by good words and fair speeches deceive the hearts of the simple. Romans 16:17-18

My son, let not them depart from thine eyes: keep sound wisdom and discretion. Proverbs 3:21

The Lord is still awaiting our humble, childlike offerings. He wants all of us—so that He can use all of us.

Is there anything we now withhold?

…but with the lowly is wisdom. Proverbs 11:2

They that sow in tears shall reap in joy. He that goeth forth and weepeth, bearing precious seed, shall doubtless come again with rejoicing, bringing his sheaves with him. Psalm 126:5-6

…for as soon as Zion travailed, she brought forth her children. Isaiah 66:8

Search me, O God, and know my heart: try me, and know my thoughts: and see if there be any wicked way in me, and lead me in the way everlasting. Psalm 139:23-24 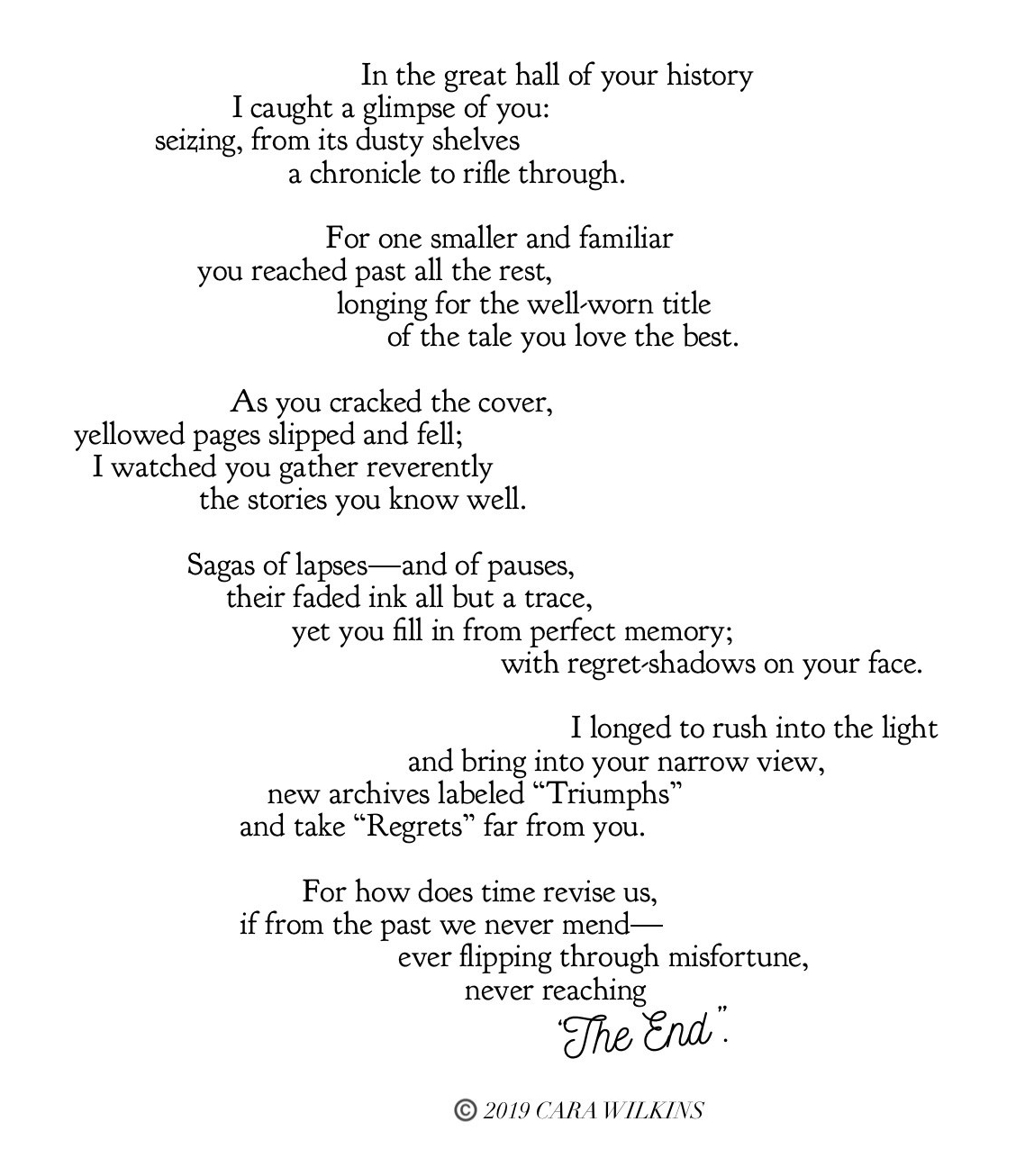 Unworthy though we may be, we must relinquish our past to the work of mercy. Unless we do, we will forever wander through the long halls of our histories; selecting the worst of our errors and misdeeds to reread as if in endless punishment; stuck in a past that we cannot escape alone.

Do not linger in the volume of your disappointments.

Don’t pick it up again.

This shall be written for the generation to come: and the people which shall be created shall praise the Lord.